Essere and Stare are very important Italian verbs. It’s easy to get lost, since sometimes they both mean “to be” 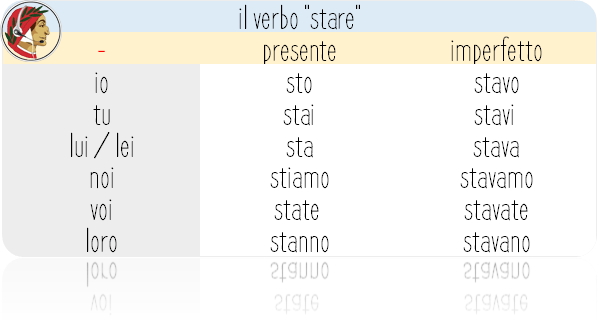 The use of two important Italian verbs essere and stare can generate some confusion with English speakers. The reasons behind this confusion are several.

To be and to stay roughly correspond to essere and stare, but in some cases they do not. You probably learned in your first Italian class that “How are you?” is “Come stai (tu)?”.

We use adverbs with stare (bene, male) and adjectives with essere (stanco, felice) for expressing a physical or mental condition. Stare in this case is very close to essere.

Stare as to be in a place

In the first sentence I say that the dog is usually outside, so it needs to stay out; in the second, the dog is outside now. Stare indicates “being” in a place for an amount of time, while essere is just now.

As a side note, quite relevant, in Central and Southern Italy, stare is used quite frequently in sentences where we should use essere. People often say:

A rather confusing difference between English and Italian is in the construction of the progressive form:

Once you learn the rule, it’s quite easy to remember it.

Finally, a very important and quite overlooked oddity of the Italian language. The past participles of essere and stare (been and stayed) are the same: “stato”.

Io sono stato can mean both “I have been” and “I have stayed” (or I was and I stayed).

All the reasons above can explain why essere and stare are so connected, similar and at first confusing. Apparently the big part of the confusion comes from the use of stare. Let’s look at a few examples.

Stare in a place for a period of time

In Southern Italy, people would say “sto a casa” to indicate “I’m home now” instead of “sono a casa”. So you don’t have to worry, Italians are confused too.

Thank you for your useful explanations. Does ‘stare’ also mean something like our English ‘to look?’ Maria, oggi stai molto bene. Maria, you look nice today.

Yes. When “stare” is followed by the adverbs “bene” or “male”, we talk about a condition, visible or abstract. It applies to the appearance: “Maria, oggi stai bene” or “Maria, questo vestito TI STA bene”; but also, for example, wealth: “Maria non è ricca ma sta bene”. Wealthy in Italian is “benestante”. Ciao.

Any cookies that may not be particularly necessary for the website to function and is used specifically to collect user personal data via analytics, ads, other embedded contents are termed as non-necessary cookies. It is mandatory to procure user consent prior to running these cookies on your website.